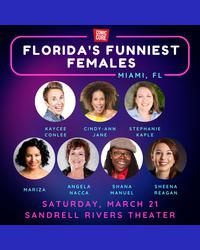 × Join the finalists from Comic Cure’s Florida’s Funniest Female contest, as they bring the funny from across the Sunshine State. Their hilarious stories of career, marriage, motherhood, dating and more leave audiences laughing, gasping, stomping, and crying for more.

Kaycee Conlee (Deerfield Beach) - Florida’s Funniest Female 2019. Kaycee Conlee is a comedian, podcaster, and host. She has opened for Jay Leno, Fortune Feimster, and Preacher Lawson. In 2018, she earned “Best Of The Fest” at the Burbank Comedy Festival. On stage, she shares her unique perspective as a lesbian with terrible gaydar and has all the charm and likability of ‘the gay girl next door.’ She currently hosts the “Not From Here” podcast featuring fish out of water stories and the “Clean Comic” web series featuring her instruction and commentary as she cleans, as well as various live shows.

Stephanie Kaple (Key West) - Florida’s Funniest Female 2019 Runner-Up. Originally from Ohio, Stephanie Kaple first tried standup with Comedy Key West in 2016 and has been making crowds laugh around the island since. Stephanie’s dedication to watching television, appreciation of fast food, and embarrassing dating life makes audience members feel far better about their own lives. Stephanie has opened for Howie Mandel at the Key West Theater and has been featured in Keys Style magazine. She is the winner of the 2015 Key West Story Slam Grand Slam and the 2018 Last Turkey Standing Comedy Key West.

Angela Nacca (West Palm Beach) - Florida’s Funniest Female 2018 Runner-Up. Angela B. Nacca represents the moms, the wives, and the working and menopausal women of the world. Her act is sure to keep you laughing as she tells the stories of her 36-year marriage, her career in medicine, or the trials of menopause – like "doing a little peepee in your pants when you laugh and sneeze.” Born and raised in New Haven, Connecticut, before moving to West Palm Beach, Florida, 14 years ago, Angela has been a hit in a range of venues. She's performed at the Improvs of South Florida, Funny Bones in Hartford, Connecticut, and toured with Comic's Rock Tour giving performances in Washington, DC, Virginia Beach, and Staten Island. Recently she was selected as one of the Top 40 comedians and will be competing in the World Series of Comedy, and was a runner-up at Ultimate Miami Comedian as well as in Florida's Funniest Females comedy competition.

Cindy-Ann Jane (Tamarac) - Florida’s Funniest Female 2019 Finalist. Cindy-Ann Jane was born and raised in Trinidad and Tobago. From an early age it was clear that she had the gift to make others laugh, whether with or at her, remains unclear. In 2014, coming to grips with ‘empty nest’ syndrome, she decided to challenge herself and attended a stand-up comedy class at the renowned ‪Improv Comedy Club in Fort Lauderdale. The night of graduation she was chosen as the Act to close the show. She told funny stories; the audience laughed. She didn’t take that for granted! She has twice been a finalist in Florida’s Funniest Female and has performed across the globe in New York City, Toronto, London and Trinidad and Tobago.

Mariza (Boca Raton) - Florida’s Funniest Female 2019 Finalist. Newly divorced, Mariza has one thing to say about marriage: Suck it up! Unless you want to end up having to work. Mariza is Mexican but she is a legal citizen of the United States because she took the Naturalization Test and passed it. She’s a mother of two multicultural daughters, a photographer, and a homeschool survivor.

This is a general admission performance - the seats are on a first come, first serve basis when you arrive at the theatre.

Doors open 1 hour prior to start of performance.