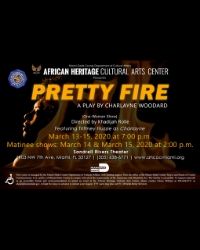 “Pretty Fire,” winner of two NAACP Theatre Awards (Best Play and Best Playwright), is the first play of a trilogy written by playwright and actress Charlayne Woodard. In five autobiographical vignettes, the play is a touching story of an African American family through three generations of love, struggle and triumph. The one-woman show shares the story of Woodard’s premature birth and her growing up in Albany, New York, while the Ku Klux Klan burned crosses in her grandparents’ town in Georgia.

“Pretty Fire” also serves as the directorial debut of Carbonell-nominated actress, and Winner of the Broadway World Award for Best Actress, Khadijah Rolle.

This is a general admission performance - the seats are on a first come, first serve basis when you arrive at the theatre.

Doors open 1 hour prior to start of performance.