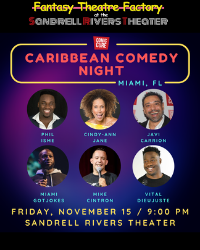 × Fantasy Theatre Factory presents Comedy@SRT Caribbean Theme! Join us for a night of comedy featuring comedians from the Caribbean region.

Cindy-Ann Jane was born and raised in Trinidad and Tobago. From an early age it was clear that she had the gift to make others laugh, whether with or at her, remains unclear. Cindy-Ann Jane uses levity, lightheartedness and Improv to reduce stress levels and provide a salve for the more difficult parts of life. She was a finalist in Florida’s Funniest Female contest and has performed in New York City, Toronto, London and Trinidad and Tobago where she hosts her own shows.

Vital Dieujuste was born in Haiti at the tender age of zero. He was an infantrymen in the u.s. army. He has been doing comedy for 3 years. In 2018 he was a finalist in Ultimate Miami Comedy contest, opening for Last Comic Standing winner Felipe Esparza. Vital has never lost a sock and has never left a crowd unsatisfied (he can't say the same for his girlfriend).

Born in Puerto Rico and raised in Miami Half Puerto Rican and a ¼ Cuban. Javi came to Miami when he was 13 years old and didn’t know much “Ingles” all he knew was “My Name is J A V I E R" and some words like “Senquio” “Escusmi” “I need a lawyer” just the basics. Javi has featured for Kyle Grooms, Angel Salazar, Tony Rock and many more. He now hosts his own show “Spanglish Nights” at the Miami Improv.

A hard working man by day and tell jokes by night! One of the up and coming comics in Miami that’s making a name for himself. His comedy style is real risky and always on the edge, he embraces every bit of it.

Phil Isme is a multifaceted comedian that hails from Port St. Lucie. Not only is he a dynamic stand up comedian but he has a background of sketch comedy, theatre, playwriting, acting and improvisational comedy. He was a finalist in the 2016 Florida's Funniest Comedian Competition, performed at the Baltimore Comedy Festival, and recently had a short film accepted at the Austin Comedy Short Film Festival and Portland Comedy Film Festival. He has opened up for Shawty the Comedian, Michael Winslow, Tom Rhodes, Myq Kaplan, Rich Vos, Kyle Grooms and the talent coordinator of the Late Night with David Letterman, Eddie Brill! A great talent that uses his many tools to get you rolling with laughter thanks to his theater background! Come see one of the fasting rising comics in the south!