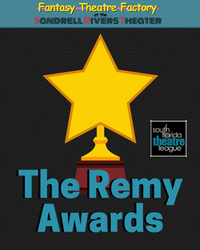 × The South Florida Theatre League is excited to announce the return of the Remy Awards in 2018. The Remy Awards, named in honor of Remberto Cabrera, the former Miami-Dade County Department of Cultural Affairs’ Senior Cultural Administrator and Chief of Cultural Development, are given to the unsung heroes who provide outstanding service behind the scenes of the South Florida Theatre League Community.

For 2018, the Awards will be presented as part of an evening fundraiser for the South Florida Theatre League at Fantasy Theatre Factory at the Sandrell Rivers Theatre in Miami. The evening will start with a reception, where industry members and audience members can mingle and enjoy light refreshments and partake in a silent auction. The evening will progress with performances by Eytan Deray, Casey Dressler, Sabrina Gore, and Villain Theater, with Theatre League Board member Vanessa Elise as the master of ceremonies. After the performances, the awards will be presented. Tickets are $10.