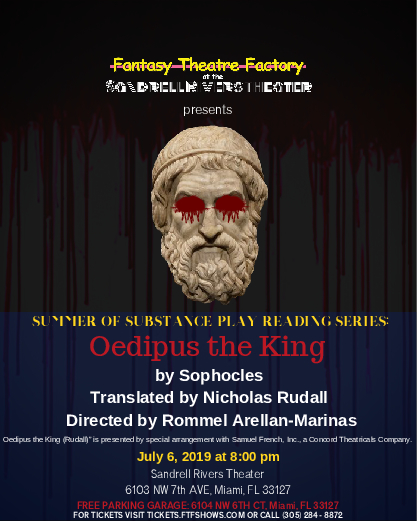 Fantasy Theatre Factory’s Summer Play Reading Series returns with the Summer of Substance! Intellectually stimulating works for the summer season. This year’s staged readings include a mix of new and old, with two new plays, FOUR BEDROOMS by Marj O’Neill-Butler directed by Ricky J. Martinez and by HEAVENLY HANDS by Ricky J. Martinez directed by Marj O’Neill-Butler and two classics OEDIPUS THE KING by Sophocles directed by Rommel Arellan-Marinas and NO EXIT by Jean-Paul Sartre directed by Larry Fields. Be sure to get your free tickets today, and join us for an engaging evening of theatre with the Summer of Substance at Fantasy Theatre Factory!